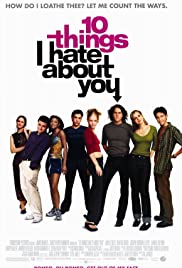 10 Things I Hate About You

Bianca, a tenth grader, has never gone on a date, but she isn’t allowed to go out with boys until her older sister Kat gets a boyfriend. The problem is, Kat rubs nearly everyone the wrong way. But Bianca and the guy she has her eye on, Joey, are eager, so Joey fixes Kat up with Patrick, a new kid in town just bitter enough for Kat.