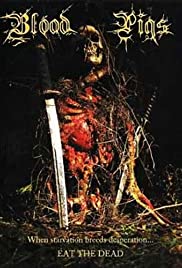 Ninety nine percent of the worlds has been destroyed by a bio-chemical war. Technology is obsolete and the soil has been polluted leaving people with barely any food. The survivors try to continue on by hunting and consuming the living dead which has dire results as the dead flesh begins to mutate with the bio-chemical still in the atmosphere. People’s digestive systems begin to evolve and force their way out of victims mouths to search for food on their own. Mutations spiral out of control into a grotesque finale.