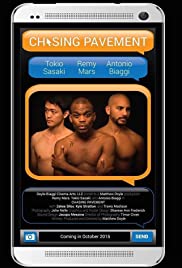 Chasing Pavement stars Remy Mars as Elijah Young, an ‘urban’ porn star who is preparing to leave the adult entertainment industry and start a new career as a chef. His new roommate, Takeshi, played by Tokio Sasaki, is a Japanese immigrant who is looking for a new start in the information technology field. Takeshi, who feels completely invisible in the United States, becomes obsessed with his extremely visible flatmate. Takeshi’s obsession culminates in a violation of boundaries that brings the two together for a moment of intimacy that neither will soon forget. The movie also stars Antonio Biaggi as Bryson Colon, a man with a troubled past who frequently hires Elijah as an escort, but wants much more.