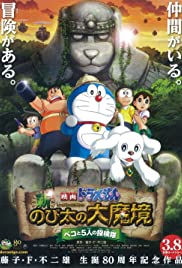 The film starts with Gian seeing some like spirit and it asks him to accomplish a task. The story starts when a stray dogs are searching some foods in the can. Then a dirty white dog comes out of nowhere. Just then, the dog creates a close stare to the stray dogs and forces to run away. But the dog is disappointed that he doesn’t know what to do after searching the garbage, under the pouring rain. After that, Suneo starts saying about the discoverable places on Earth and him and Gian are totally disappointed about that. That then, they are asking favor to Nobita to take them to an undiscovered place to be seen by their naked eyes. Nobita refuses but tells he will try his best. He comes to upstairs to explain Doraemon what the problem is now.