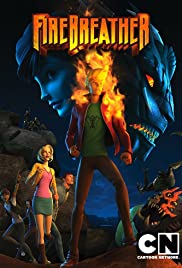 Firebreather is a CGI animated made-for-TV film, based on the eponymous comic book series. It’s not easy being a teen like Duncan. His mom wants him to pay more attention to his homework, while his dad – a 120-foot-tall monster known as a Kaiju – wants him to become the next King of All Monsters. When these worlds collide, Duncan must use his human wits and his Kaiju powers – including super strength, agility and the ability to breathe fire – to protect his family and friends from a giant monster rampage.