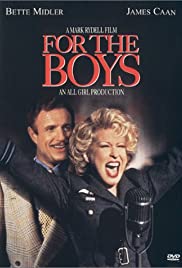 With the help of the singer and dancer Dixie Leonhard US-Entertainer Eddie Sparks wants to bring some fun to the soldiers during World War II. Becoming a perfect team they tour from North Africa to the Pacific to act for “the boys”. Later they continue their work but when the author Silver gets involved into McCarthy’s campaign and is being fired by Eddie, Dixie turns away from him, too.