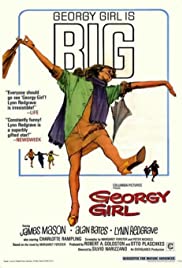 Georgy has resigned herself to being one of life’s accidents. She disapproves somewhat of her father’s butlering James Leamington. She’s tall, plump, sloppy and wistfully envious of what she conceives to be the life led by her beautiful, but icy roommate. Where her roommate, Meredith, is cool and calculating, Georgy gets so involved with the people around her she behaves like an affectionate puppy. Most of all she burns to be a mother. But it is Meredith that is in the hospital having an unwanted child.