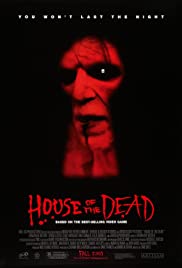 House of the Dead

Set on an island off the coast, a techno rave party attracts a diverse group of college coeds and a Coast Guard officer. Soon, they discover that their X-laced escapades are to be interrupted by zombies and monsters that attack them on the ground, from the air, and in the sea, ruled by an evil entity in the House of the Dead… Prequel to the House of the Dead video games.