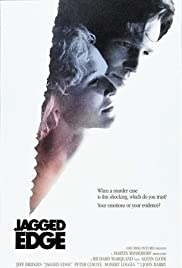 San Francisco heiress Page Forrester is brutally murdered in her remote beach house. Her husband Jack is devastated by the crime but soon finds himself accused of her murder. He hires lawyer Teddy Barnes to defend him, despite the fact she hasn’t handled a criminal case for many years. There’s a certain chemistry between them and Teddy soon finds herself defending the man she loves.