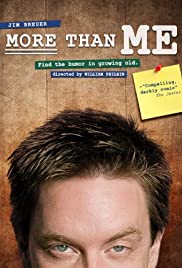 Jim Breuer: More Than Me

Actor/comedian Jim Breuer, best known from Saturday Night Live and the film Half Baked, set out in 2008 on his first stand-up tour in six years, taking his 84 year-old father along for the ride of his life. While struggling with the chores of caregiving and coming to terms with his father’s mortality, Jim is determined to strengthen their relationship while on the road. Funny and raw, More Than Me is an intimate story of growing up and growing old.