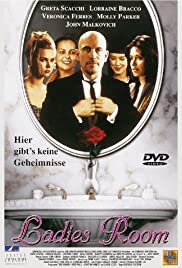 In an ethereal, high-ceilinged room, women stand, waiting. Perhaps it’s Purgatory and they’re dead. In the room, two young women, one an actress and the other a psychologist, watch the last few days of their lives on a TV screen. Both are having affairs with married men, each has a long encounter with her lover’s wife, and both these scenes take place in a ladies’ room, one backstage at a play that’s about to preview, the other at an opera house during the first act. The relationships between each pair of younger and older women take surprising turns, and in the room with the TV, a sylph asks probing and challenging questions of the two young women as they watch.