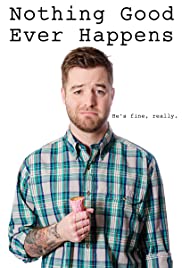 Nothing Good Ever Happens

Neil is a painter and graphic designer. On a morning just like any other morning his girlfriend Amanda leaves him and moves out of their house (don’t worry, it’s a rental.) That morning Neil tries to cope as best he knows how, but in a strange turn of events he ends up shooting back a glass of bleach. He wakes up to suicide watch and court appointed therapy as well as the empty void Amanda left. Now Neil has to decide what he can do to feel better about himself. Should he get Amanda back? Make his old friends like him again? Confront his estranged father? Eat a ton of Chinese food? Or maybe he should just finish his latest goddamned painting. Will he figure it out? Well you better hope so.