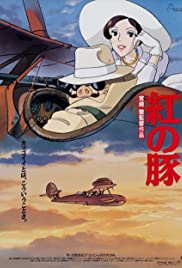 Porco Rosso, known in Japan as Crimson Pig (Kurenai no Buta) is the sixth animated film by Hayao Miyazaki and released in 1992. You’re introduced to an Italian World War I fighter ace, now living as a freelance bounty hunter chasing “air pirates” in the Adriatic Sea. He has been given a curse that changed his head to that of a pig. Once called Marco Pagot, he is now known to the world as “Porco Rosso”, Italian for “Red Pig.”