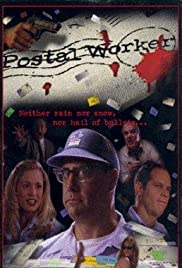 A time bomb is ticking in a small regional postal facility and his name is Oren Starks (Brad Garrett). Oren fits the profile of a new breed of killers – postal workers who crack under pressure. Their brains short circuit and the paranoid delusions begin. Going Postal begins as famed psychologist Dr. Nicolas Brink (Richard Portnow) launches his controversial research study in order to create a “psychological vaccine” to defuse these human time bombs who seem to be going postal at an alarming rate. It is revealed that almost everyone at this post office is on the brink of insanity! There’s a perverse love triangle involving Oren, Harry Cash (Rob Roy Fitzgerald) and the sexy survivor of another postal shootout, Tammy Skye (Grace Cavanaugh). Postmaster Calhoun (William Long, Jr.) is driving the staff nuts by constantly micro monitoring their bathroom breaks. Something has got to give and its not the timely delivery of the U.S. mail.