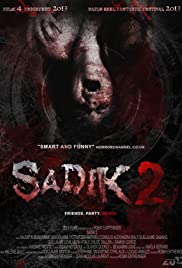 Friends. Party. Death. As usual, friends get together in a rental house to celebrate new year’s eve. Will Isa take advantage of this week in the county to finally get things started with Fred, her best friend? Will Kevin make a move on Gwendo, the goth girl? Will Marco, the amateur film maker and slasher fan, manage to convince his friends to play in his next short film? Things are running smoothly, until New Year’s Eve, when one of them mysteriously disappears…