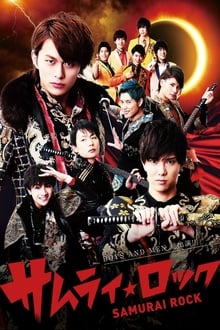 Masami is a guitarist who dreams of his band “Rhythm Head” winning the Grand Prix at the Japan Music Carnival. History, and the warlords of 16th century feudal Japan are the very last thing on his mind. But when Rhythm Head are performing in Nagoya, a mysterious lightning strike causes not only a power blackout, but also a “time slip”, in which two of Japan’s preeminent samurai-era figures, Nobunaga Oda and Hideyoshi Toyotomi are transported to present day Japan. To Rhythm Head’s manager, the duo are the perfect vehicle for the band to transition to an idol group, increase their chances of becoming famous, winning accolades and taking away the Japan Music Carnival top prize. Could this be the beginning of a new type of music, courtesy of a brand new band Samurai Rock?