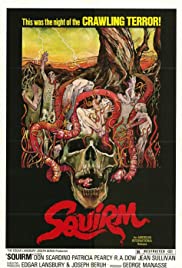 At the beginning of the film, we learn from one of the characters that earthworms can be called to the surface with electricity, but somehow it turns them into vicious flesh-eaters. Sure enough, a storm that night causes some power lines to break and touch the ground, drawing millions of man-eating worms out of the earth, and into town where they quickly start munching on the locals.