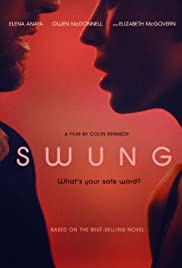 David’s life is on the slide: he’s broke, in the middle of a divorce and ‘can’t get it up’. His girlfriend, Alice, is his rock, but the magazine she writes for is going down and the pressure is on to find a story. While job hunting online, David stumbles across the perfect antidote to his boredom: a ‘Swingers’ site. The resulting inbox of lewd invitations on the home-laptop justifiably upsets Alice, until she realises this could be just the ‘story’ she needs. The idea of uncovering the swinging scene causes quite a stir in Alice’s office and, much to David’s chagrin, she is urged to pursue the story. Their first reluctant foray is an hysterically low-rent initiation, however, an unexpected upturn for David’s manhood is all the extra encouragement they need. As events accelerate beyond their control the once adoring couple become lost and fundamental questions are asked of their relationship.