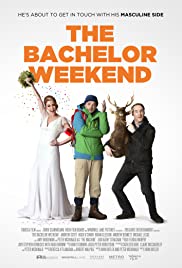 At his fiancée’s urging, a very modern Irish groom-to-be reluctantly agrees to a stag weekend with his friends, camping in the western wilderness of Ireland. Much to their chagrin, these modern men are joined by the brother of the bride, a crazy, unpredictable alpha male known as “The Machine”, and an explosive Id to their collective Ego. The Machine is a force of nature, and under his leadership, the men—stripped of modern comfort, convenience and, finally, clothing—must begin their journey into the wild.