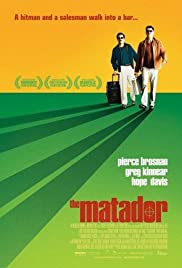 The life of Danny Wright, a salesman forever on the road, veers into dangerous and surreal territory when he wanders into a Mexican bar and meets a mysterious stranger, Julian, who’s very likely a hit man. Their meeting sets off a chain of events that will change their lives forever, as Wright is suddenly thrust into a far-from-mundane existence that he takes to surprisingly well … once he gets acclimated to it.